Morgan is a lifelong resident of Michigan who grew up in the Thumb region, spent every summer on the shore of Lake Michigan, and now permanently resides in rural Shiawassee County. In addition to a home based in the Great Lakes state, Morgan grew up on a 30+ horse farm where her family owns and operates a horse training business, McCarthy Warda Performance Horses. It is because of this business that Morgan became involved in the quarter horse industry at a young age and traveled nationwide to compete with her horses.

Morgan is a member of the American and Michigan Quarter Horse Associations where she has held leadership roles on the Board of Directors as both a youth and amateur exhibitor, attended national leadership seminars, volunteered at local events, and spoke at youth activities. She has also won several state, national, and world championships and an All American Quarter Horse Congress championship in her 25 years of competing. In 2017, Morgan represented the state as the Michigan Quarter Horse Association Queen.

Outside of the equine industry, Morgan is heavily involved in the outdoors and conservation. After obtaining a degree in Wildlife Biology she has gone on to work for the Natural Resources Conservation Service (NRCS) in soil conservation and now as a biologist. Her primary role is to connect landowners with the resources and technical service to implement conservation practices on their properties that benefit the land, water, and wildlife. She also enjoys backpacking as another way to enjoy Michigan’s abundant natural features.

Morgan has also worked with multiple conservation agencies including the Michigan DNR, National Deer Association, Pheasants Forever and Michigan United Conservation Clubs to develop wildlife cooperatives. These groups focus on promoting land stewardship, wildlife management, and habitat improvements on a landscape level. Morgan continues to volunteer locally with these organizations, holds leadership roles with the Shiawassee River NDA Branch and is a Level I and II Deer Steward.

For the last ten years, Morgan has also spent time assisting her husband on their crop and livestock farm alongside their family. They grow corn, soybeans, hay and raise a variety of livestock. In 2019, they established Lennon Farm & Livestock where they specialize in the marketing and sales of beef, pork, turkey, and chicken.

Real Estate is a way for Morgan to bring her passions together in one place – and help people find a home for theirs whether it be on acres of green pastures and barns, prime farmland, or a hunting property. 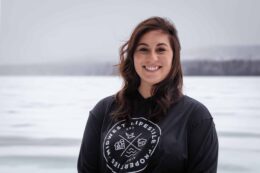